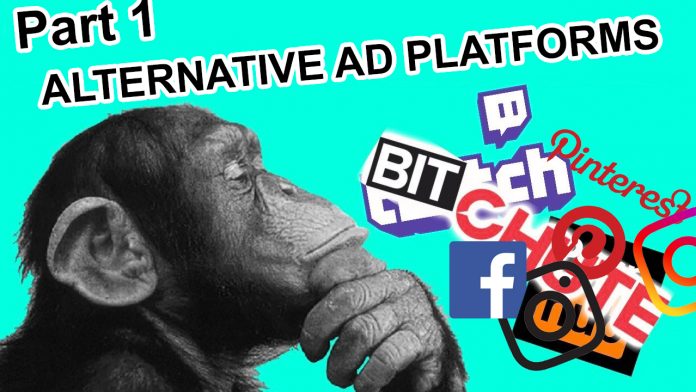 It is easy to see why most online marketers primarily use Facebook and Google to advertise their products and services. They are easy platforms to use with great targeting options, and massive user bases. However, many marketers rely solely on these platforms and do not look at the many alternative platforms they have at their disposal.

Here we will discuss three large platforms that you may have not thought about using yet: Twitch, Pinterest, and LinkedIn. We will go over their main audiences and the benefits and disadvantages of advertising on each of these platforms.

Gaming has been a main source of entertainment for younger generations for decades now, and in certain cases, individuals favor watching other people play video games rather than playing the games themselves. In recent years, gaming has become an online “sport” (referred to as eSport), which attracts millions of viewers around the world. According to ESC, last year 100 million viewers tuned in to watch the League of Legends annual world championship online. Online gaming is huge on a global scale, which creates the perfect opportunity for marketers to target younger audiences by the millions.

Currently, the eSport industry brings in roughly $906 million in revenue, and by 2021, revenues are expected to reach $1.6 billion. It is a growing area with a ton of opportunity for marketers.

Twitch, one of the most popular eSport streaming websites, is an excellent platform to advertise on if you are targeting young males who are interested in technology and gaming. According to Twitch, they have 15 million active viewers that spend an average of 106 minutes watching live gaming every day. They also have over 110 affiliate partners, which suggests that they are affiliate marketing friendly.

Due to the interactive nature of the platform, users are more engaged. When engagement is higher among viewers, they are paying more attention to your advertisements. Additionally, Twitch reported that their users are open to seeing advertising on the platform, and gave the following statistics to support this notion:

We’re not suggesting your sponsor a team for your next e-commerce product, but this demonstrates that their user base isn’t entirely against advertisements.

It’s no surprise that millennial males make up for the large portion of Twitch’s spectators. 81.5% of their users are males, 55% of which are in the 18-34 year old age bracket. This group of users could be challenging to advertise to given their age. Many of their users are young, and therefore, they have less spending power than older audiences.

However, Twitch’s narrow audience is ideal for companies that are promoting anything technology or game-related. For example, if you are promoting drones, software, or a new video game, your target audience will be similar to Twitch users. Their platform is huge and their users are engaged, which makes Twitch a great place to advertise if you are targeting young males who love technology and gaming.

Since Twitch is a platform where users watch live video games being played, a lot of their advertisements are videos, but they also have some display advertisements. Below are some of the advertising products Twitch offers:

As we mentioned earlier, Twitch users are engaged due to the interactive videos they watch on the platform. The players they are watching are not just playing the game – the players who are broadcasted entertain viewers by narrating the game as well. It is what makes watching other players on Twitch so interesting. This means that video advertising is probably more effective on Twitch than display ads.

There are various areas where Pinterest’s users can see content. Pinners can see pins by visiting user profiles, searching with keywords and categories, and on their home page. Pinterest users can see the pins others have saved on their own feeds when they follow them, which increase reach and drive sales.

Another great thing about advertising on the platform is that users can save pins to their Pinterest boards, and revisit them at a later time. This is very useful for consumers who are easily distracted.

If you are trying to target young women, Pinterest is an excellent platform for you to reach them. Omnicore reported the following facts on their demographics:

Pinterest’s audience is almost the exact opposite to Twitch users. The overwhelming majority of Pinners are young Females, and they have money to spend on products. This type of audience is ideal for advertisers who are promoting very female-centric products. For example, a popular product like the Australian Pink Clay mask would do extremely well on Pinterest. Sand & Sky sold more than 10,000 units of their product, and garnered a waiting list of 2,000 people as well. Pinterest would be the ideal platform to advertise a viral product beauty such as this.

Pinterest’s Promoted Pins don’t even look like ads. Their advertisements are designed in a way that does not interfere or distract users. They are made to almost blend in with the page, which makes them much less invasive to users.

Their Shopping Ads are another great feature. The purpose of it is to be able to provide brands with the opportunity to market their products by turning their Pinterest catalogues into “visual and actionable ads”. Shopping Ads allow businesses to connect to their shoppers at all stages of their shopping journey.

Like Twitch and Pinterest, LinkedIn is a very targeted advertising platform. It is essentially a Facebook for professionals. With over 546 million users, LinkedIn provides many opportunities for advertisers to reach highly targeted groups. The platform is particularly useful for B2B advertising.

LinkedIn ads allow businesses to reach a very specific audience with the help of their great targeting options. You can target professionals based on many variables, including: job title, skills, interests, employer, and industry. As noted by MarketingLand, professionals on LinkedIn also tend to update the information on their profiles more frequently than they do on their other social media profiles.

Sponsored Content: Company Page updates that appear on the LinkedIn homepage of users you have targeted with your advertisement.

Sponsored InMail: With this option, businesses can send personalized messages to LinkedIn users that you have targeted. This is done through LinkedIn Messenger. The targeted users then receive the message when they are active on the platform.

Text Ads: Using Text Ads, you can drive traffic to your company’s website or LinkedIn page. This is the option that most affiliate marketers opt to use.

The biggest disadvantage of using LinkedIn ads is how expensive they are. The average CPC is much higher on LinkedIn than it is on other platforms. In a study conducted by Hubspot, they stated that their customers paid roughly $5.74 per click, whereas on AdWords they only paid $3.35 per click. However, they also declared that LinkedIn had higher conversion rates. With LinkedIn ads, their customers converted 9% of traffic to their landing pages, while “the average conversion rate for B2B advertisers on Google search is 2.58%”.

Here is a glimpse of what LinkedIn’s Campaign Manager looks like:

Twitch, Pinterest, and LinkedIn are less popular platforms to advertise on, but they should be on online marketers radars. As you could see, they are unique and have very large user bases that you can advertise to. If the audiences you are targeting fit into any of these three platforms, we recommend that you use them as alternatives to Facebook and Google.